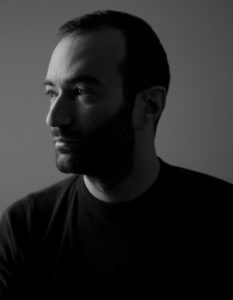 A. C. was born in Agrinion, Greece in 1985. In 2011 he graduaded from the University of Athens with a degree from the Department of Informatics and Telecommunications. Since 2004 he has worked in several theatre productions and movies as an assistant and casting director (The Heart of the Beast by R. Haralambidis, Homeland by S. Tzoumerkas, A Blast by S. Tzoumerkas, Vourkoti by H. Mastrandréas etc). He directed (and wrote the last two of them) the awarded short films Student Occupation, Chelsea-Barcelona and I’ll take a deep breath and I’ll tell you and the TV documentary feature film Bullying Diaries for the Smile of the Child. He has worked as a director on different projects of Hellenic Post, Cavafy Archive and Onassis Cultural Center. He has directed music videos, theatrical play teasers and two episodes for the TV documentary series Pirates of the Aegean (for OPEN BEYOND channel). In 2014, his feature script What a silly boy was selected for the !f Istanbul-Sundance Screenwriters Lab. In 2020 he was selected in the Talents Sarajevo with his feature film script The Village in the Woods. In 2021 he directed the TV feature docudrama “The Battle of Lepanto” (History Channel of Cosmote TV). Now he works as a director for the TV docudrama series The Generation of ’30 for the same channel.

Docudrama about the famous battle of Lepanto (1451 AC)

Episode 3: Fire in the Cyclades

Exploring the “Other” Home (short, documentary)

The making of the theatrical play The “Other” Home, produced by Onassis Cultural Centre